An in-depth research document that outlines the motivations and frustrations of PBS adoption for Bangalore city.

Rapid population growth coupled with dizzying year-on-year sales of motorized vehicles is choking the public transportation system and bringing traffic to a standstill.

Although in its nascent stage, public bike sharing systems can provide a promising solution for last-mile transportation in Bangalore.

The Humble bicycle represents the oldest, yet the most sustainable form of transportation in modern times. It’s the only means of commute that has a zero dependence on fossil fuels, reduces traffic congestion and environmental pollution. Moreover, cycling has been associated with improvements in health such as increased fitness, reduced stress and higher energy levels throughout the day.

Despite the dizzying growth of the motorized vehicles, the bicycle market in India is projected to grow at a CAGR of over 11% during 2016-2021, on account of rising population base in the country. 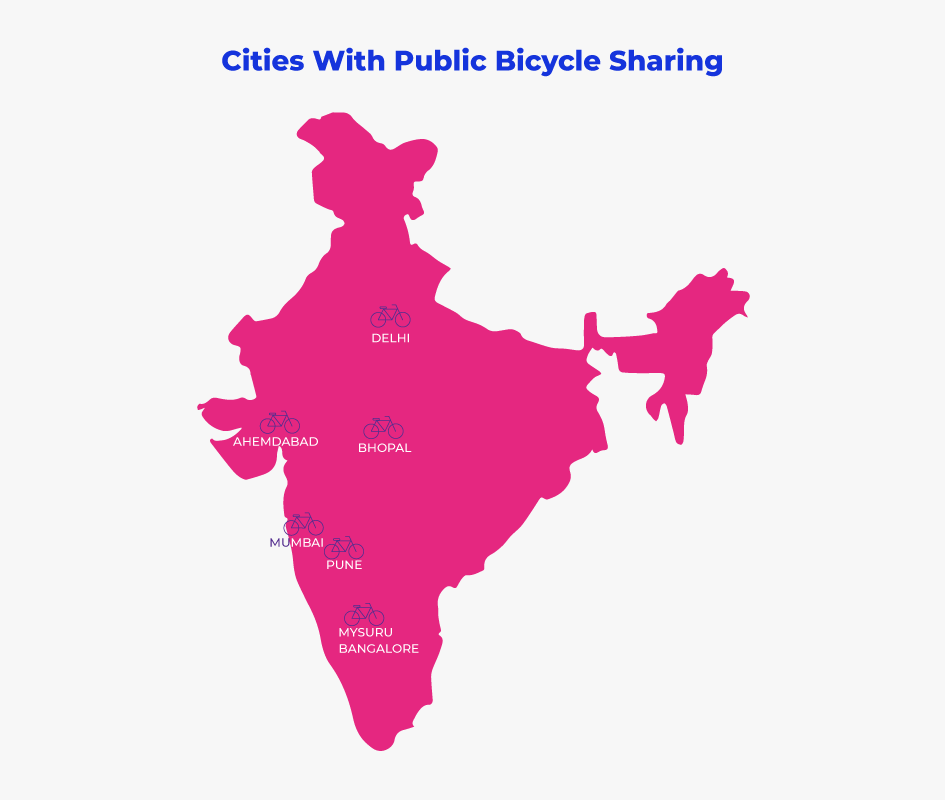 The public bicycle sharing system (PBS) poses a neat solution to make bicycles more affordable and accessible to everyone. Widely adopted the world over, a public bicycle-sharing system is a service in which bicycles are made available for shared use to individuals on a short-term basis for a price.

In India, this initiative was launched in Mysuru in 2009 across with 28 city-wide locations. Since then, this scheme has been simultaneously adopted in most metro cities.

Bike sharing can prove to be an extension to public transit services. They can prove to be exceptionally useful in delivering last mile connectivity between short distances that commuters reluctantly cover on foot.

These may include the daily commute between a person’s home and nearest bus-stop or metro-station.

Smart systems have evolved since then, which use digital means to access, coupled with docking systems to park and borrow the shared bicycle, making the system more convenient and accessible.

This will be a boon to residents in urban India, especially those who use multiple public transport systems on their daily transit routes.

These interviews were carried out remotely as well as face-to-face in the form of questions regarding the interviewees’ lifestyles, preferred modes of transport, cycling habits, motivations, problems faced, et cetera.

We interviewed 125+ people from Bangalore in an effort to understand their attitudes, motivations, problems and requirements with respect to cycling and barriers to adoption of the bike share system.

Desk research classifies people into the five broad segments, namely, non-cyclists (a group of people completely alien to cycling), lapsed cyclists (a group that cycled as children and adolescents but do not intend to renew the habit, even as a leisure activity), occasional cyclists (users that undertake cycling as a recreational activity when on vacation or for fun on a monthly or bimonthly basis; this segment has considered utility cycling but not too seriously) , sports cyclists (this segment consists of cycling enthusiasts who cycle regularly as part of leisure or sports club but not in everyday life), and utility cyclists (a group of regular cyclists who cycle to work and for daily errands).

For the purpose of providing research insights on PBS, we were able to group the cyclists further based on their behaviour and motivation to adopt PBS. The research and persona mapping techniques led us to the following kind of users. 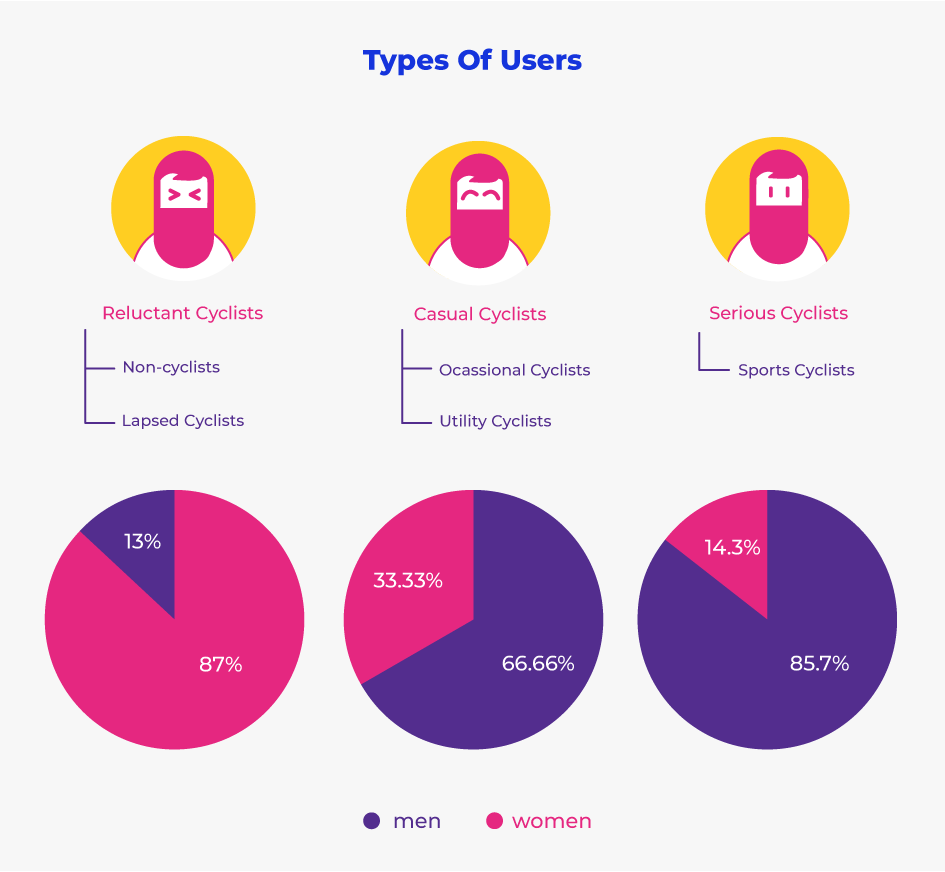 In an effort to better understand the data on hand, we segregated people by gender. The difference in adoption statistics for PBS was stark. 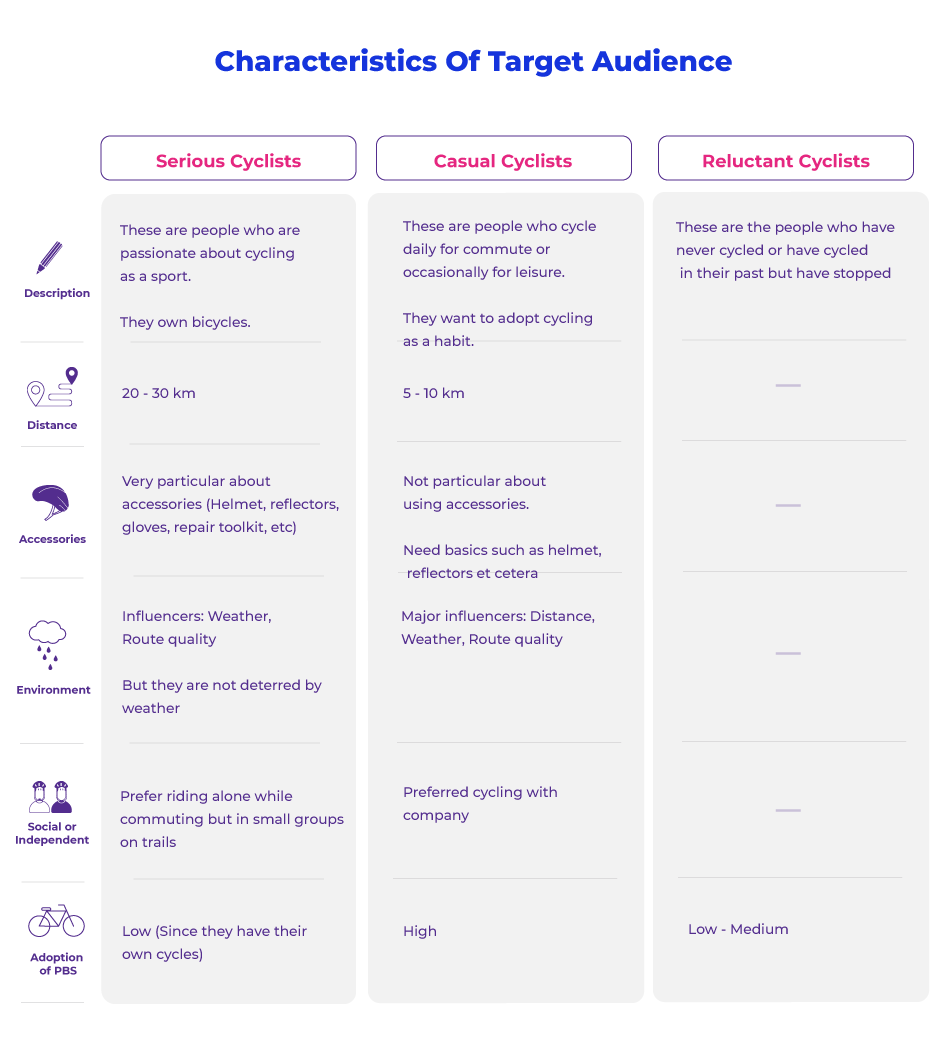 During the course of our research, we learned that need and motivation are the two crucial factors in consideration for adoption of PBS.

Each category of people has a different degree of comfort with the bicycle, different commute routes and requirements and a different perception regarding its safety of use.

We have based our research on two out of the three categories of cyclists mentioned above, that is, the reluctant users and the casual cyclists. Serious cyclists do not form our primary target audience since they are already active users, who most likely own a bike and are hence, less likely to benefit from adopting PBS.

Our research is modeled on Maslow’s Hierarchy of needs, which is a fundamental theory on the subject matter of understanding human motivation. 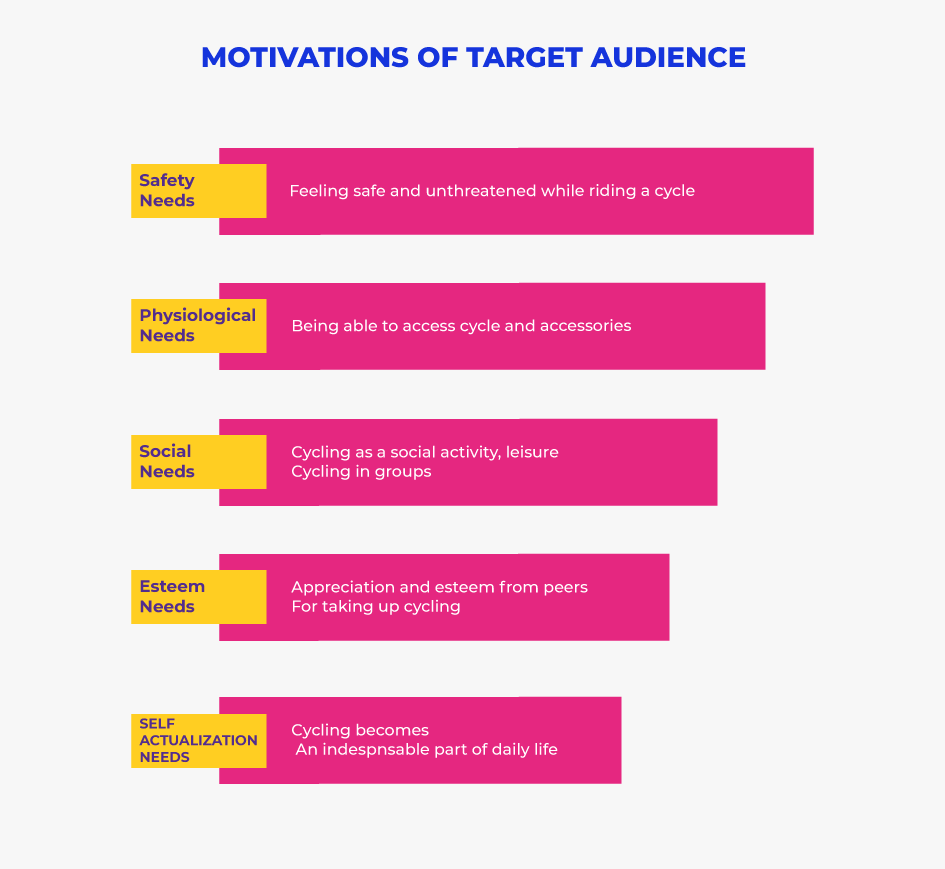 Like the original pyramid, we have arranged for cyclists’ needs and motivation in order of importance from bottom to top.

The bottom-most layer represents the most basic need while the layer on top is comprised of complex needs such as self-actualization and constant betterment of self.

Before cycling on a regular basis and for long distances, people first need to feel that cycling is a safe activity. Once the safety needs are met, they try to obtain bicycles and accessories so that they can start the activity.

Motivation Based Research Insights For Each Target Group

We analyzed the two user groups, namely, the reluctant users and casual cyclists, in terms of their placement on Maslow’s hierarchy, to get a better idea of what motivates them.