With technology propelling the world forward in unprecedented ways, the Indian sports industry has not been left behind. For a wide range of sports, from cricket to kabaddi, participation and viewership have increased. The market has opened up for new businesses, and sports-related industries, with a strong focus on emerging technologies, such as in Spektacom Technologies. Started by former cricketer Anil Kumble, Spektacom Technologies has partnered with Microsoft Corporation to announce the launch of a batting performance tracking device.

With increased viewership, there has also been an increase in sporting events, including league challenges. Fantasy Sports have been around for several decades, allowing enthusiasts to form virtual teams with their favorite players, and then watch these teams compete. Today, analytics have taken fantasy sporting to an unforeseen level, where people can form their teams based on real statistical data, rather than on gut instincts. Crunching numbers has become a trend in the sportstech industry, even amongst fans, who actively take an interest in statistical data. However, the impact of data is quite limited in India as it is not being used to its full capabilities.

As designers, we can bridge the gap and turn available data into useful and interactive information. While working on one of our recent projects, a sports application, we learned a few crucial things, which we would like to share. Please let us know what you think and we will try and include the answers to your questions, in the next piece.

Design and Analytics in Sportstech 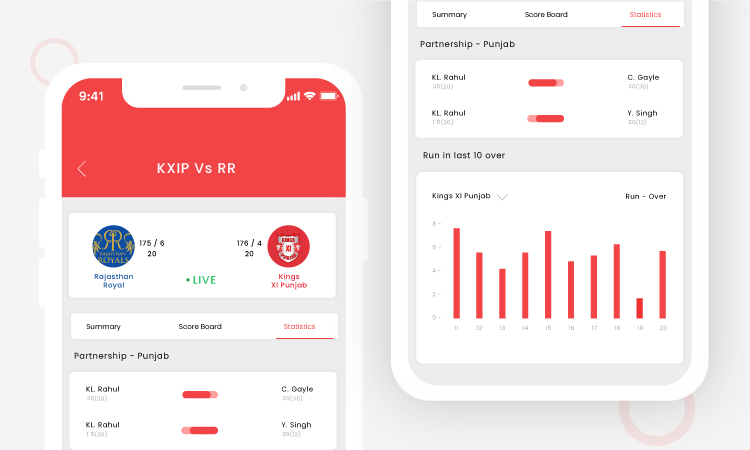 Designers play an undeniably crucial role when it comes to the presentation of data. It is important for them to showcase actionable insights from data in intuitive and interactive forms, so as to keep the user engaged. It is also important to know what information is relevant and the extent to which it is relevant. It is important to keep in mind important components of the interface that users interact with like the dashboard, news section, the player profile, and graphs to ensure the user can make the most of the right data without it being obstructive. In the sports industry, this is especially important, as we are dealing with real-time data. To ensure that all of the above needs of a user are met, it is important to keep in mind a few design principles that are relevant to the sports industry:

It is well known that a user’s attention span is up to 5 seconds long. The 5-Second Rule basically states that if you don’t capture a user’s attention within these few seconds, the user has been lost. When designing a platform for sports enthusiasts, the interface should focus on a dashboard following the 5-second principle. At first glance, one should be able to get quick insights. Since this is the first impression that a fan has of the platform, it is important to present information in a way that can give a fan a gist of the information they want to know, in the first five seconds. Therefore, the most important metrics of a match, which are most frequently needed by fans, should be immediately visible on the home screen. 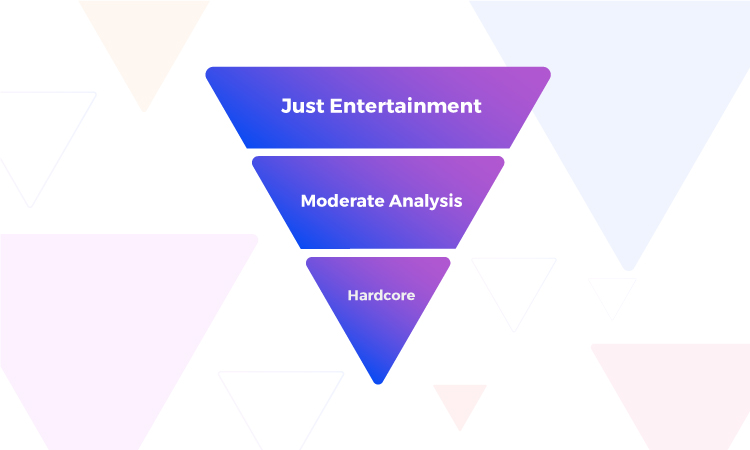 Proper data classification is important for a data-driven platform as it is the crux of making decisions with respect to layout. Thus, we paid a lot of attention to this module. The aim was to filter the information on the basis of users’ interests so as to ensure a platform that is meaningful and engaging for all sports enthusiasts. We conducted research amongst users and other stakeholders and decided that the most logical layout for us was an inverted pyramid. The idea came from journalism where the information is divided into three segments on a news report, in order of diminishing significance. At every level, we asked, “What’s next?”. This helped us derive the most logical information structure and helped us simplify the portal allowing all levels of fans to navigate smoothly through the platform.

We displayed the most significant and high-level insights on the top, the trends and what gives context to these insights in the middle and the higher granularity details that the fans can drill into and explore further in the bottom. The inverted pyramid principle is based on the idea that there are three levels of fans. The first group comprises of people that are merely curious to understand or get an overview of the sport that their peers talk about. This group also consists of those that enjoy watching sports once in a while for their entertainment.

The second group comprises of those that genuinely enjoy the sport and follow the news and updates around it. The third group consists of hardcore fans; the sport is almost like their religion. These fans want to know every little detail and are usually so engrossed that they can understand these details at a glance. These fans are usually those that indulge in virtual league games that allow them to predict the outcome of matches.

For example, if we were to design a cricket portal, the landing screen would showcase information that is exciting, like the score of the match. The second fold might showcase the players’ information and the last fold would incorporate details about the curve of the ball, and the likes.

This layout ensured that users’ interest and engagement were maintained throughout. 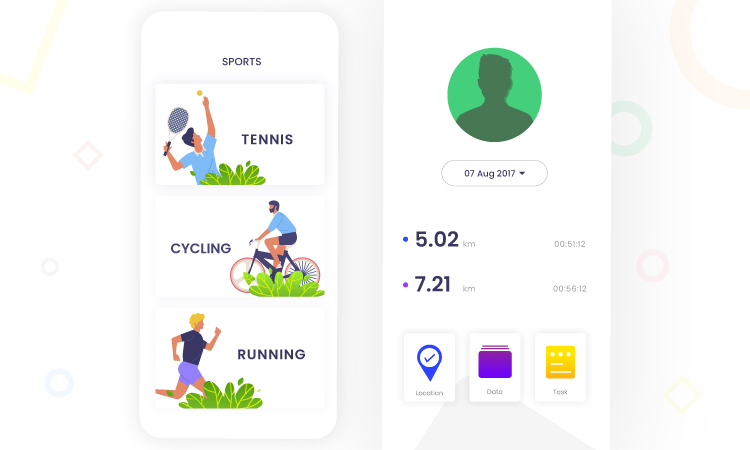 An information platform that is going to be the access point for millions, implies that it will have to stand out by ensuring information and efficient presentation go hand in hand. Cognitive psychology tells us that the human brain can comprehend around 7 +/- 2 elements at a time. An average of 7 elements in a visual is the designer’s best bet, give or take a couple of them! Anything other than the prescribed amount leads to visual clutter, which distracts the fan and leads to a loss of interest. This is why you need to try to keep a minimum of 5 and a maximum of 9 data points in a visual. 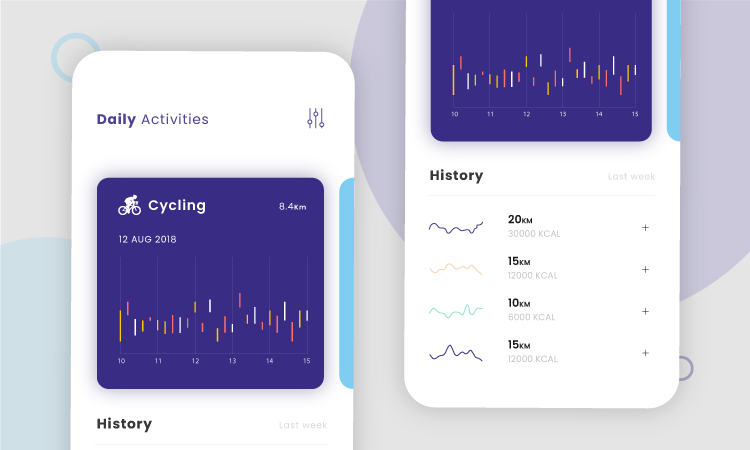 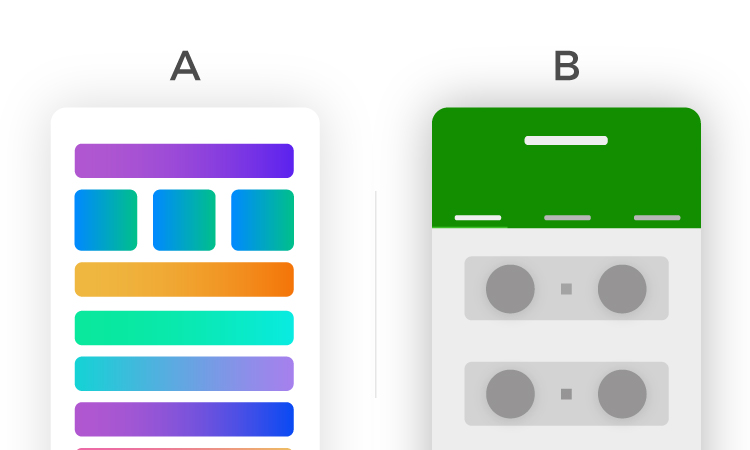 The most important thing to do before you launch a platform is testing it amongst members of the target group. This either accepts or rejects assumptions and hypotheses made before the platform was developed. It is important to note that as industries evolve, so will people and their needs, and so a product will seldom be perfect. However, with user feedback, it is possible to improvise on the existing platform and actually carve it to suit the needs of real people.

It is evident that with sports-related technologies on the rise, there is plenty of data available. A large number of sports platforms are coming up, and these need to give accurate and clear insights into the finer details of the sports because user expectations are increasing. The businesses associated thus need to ensure that the available data is presented to fans in their language, in a context that they understand. This is possible with the help of long-standing design principles that are relevant to different industries in different situations. With India catching up with different sports, especially fantasy sports, it is important to present fans with data that allows them to make decisions on the basis of facts and figures, not purely on the basis of instincts.

Today, hardcore fans are more interested in analytics than in just commentary. A platform that brings a consolidated set of information and helps them get almost a perfect picture of what the outcome of the match is going to be, will drive them to engage more with the platform. The summary of the available data should be able to keep a fan engaged, and there is a massive scope for design to enable the availability of analytics for sports enthusiasts, drawing to the conclusion that design is going to rule sports technology and other related industries.

If you liked this article, you may be interested in the blogs Innovation in Sportstech and UX UI Design Principles in Sportstech. Do give them a read.