Fintech, a relatively new term, stands for Financial Technologies, and it’s exactly what it spells out — it is the technology used in the financial sector. Terms such as Digital banking, online trading apps, and e-wallets fall under the umbrella of Fintech and have been able to completely reimagined the workings of traditional financial institutions. What’s more, this industry is extremely likely to grow, and it has been predicted that by 2020, the Indian Fintech software and services will touch a whopping US $2.4 billion. The last few years have seen a drastic change in the way Indian consumers carry out their day-to-day transactions; the upsurge has been aided with the increased use of smartphones. However, there is still a large untapped Indian market, as 80% of the population carries out transactions through cash, according to this Make in India report. Entrepreneurs have recognized this fact, and are geared towards building digital solutions that aid in managing finances extremely simple. In order to create truly successful Fintech apps, it’s important to know how to design them well as complex software and algorithms can only be made usable through proper research and experience design. 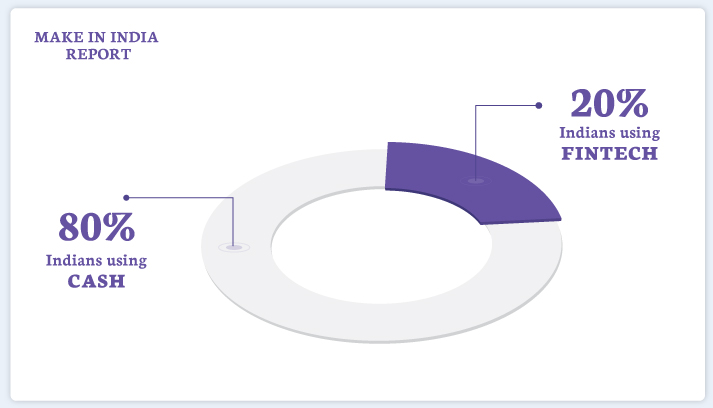 Here is a list of important notes that every designer and entrepreneur needs to consider while designing the best Fintech apps that are innovative, accessible and user-friendly.

Know the Business to Appeal to the Pros

To create the right user experience for Fintech apps, it’s vital to understand the business first— a task that requires a fair amount of Fintech research of the vertical in focus. Though no one can learn all there is about the business, as well as the client in a month or so, it is crucial to grasp more than just the basics of the product, associated users, and other involved stakeholders. It’s always encouraged to spend as much time as you can observing, and learning the tricks of the trade to plan any kind of interaction for the application.

The best Fintech apps are simple and do not overwhelm users with numbers or data. Simplifying the experience in terms of page layout, task flows, and content display is key. For example, the best way to simplify a Fintech trading application is by transforming complex financial data into easy-to-understand graphs, charts, and more. The top Fintech apps make sure the most frequently used tasks are visible to the user, are easily accessible to them, and give them confidence while handling their finances.

Basically, the focus has to be equally divided among the content and call-to-actions. The content aids the shift in user habits and adoption of new related technology, which is vital for every revolutionary Fintech idea; whereas CTAs, help users take desired actions and reinforces how easily they can manage their finance-related issues with just a few taps. 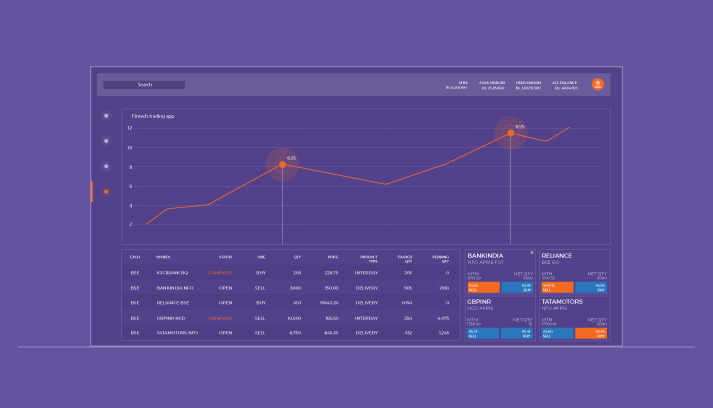 Simplicity becomes even more important in terms of Fintech platforms. Research shows that individuals in Tier-I and Tier-II cities in India still aren’t very comfortable with the use of new technology where money is involved. This is why it’s extremely important to make sure Fintech apps are kept simple and users are further educated; so as to allow new users to easily become familiar with the app and begin placing trust in it.

Add Value to the Services

Financial apps can be very daunting, as they throw a lot of numbers to users, and are always focused either on how to invest or talk about the facts of their financial status. But, to make the app more usable and engaging, we would suggest adding a few more holistic services to your target audience. Generally, financial startups have a lot of valuable data which can be used as a suggestion to improve the user’s financial conditions, or to make them aware them of their spending limits, or maybe even to offer them suggestive deals based on their spending habits. 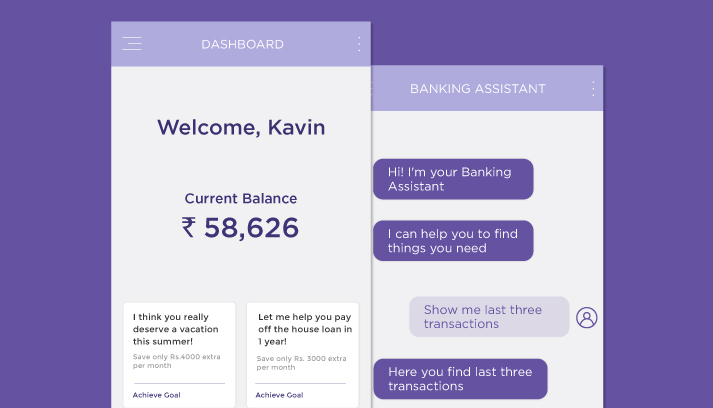 This approach to go beyond your core service and looking into a complete ecosystem will definitely engage users with the app, and also set benchmarks in the domain. To further illustrate our point, let’s take an example of a banking app.

We all know that banking professionals have an immense amount of data with regard to the users’ salary date, as well as about the vacations that the users take in a year.  In fact, banks have many deals with the travel agencies. If the banking app had to have a fun element, it could inform the user of the upcoming holiday season, and how can they can save more money on the holiday. Additionally, the app could also showcase the deals that the user can avail using their coupons or cards.

In the past five years, gamification has grown in popularity, and we’ve seen a number of the top products in a variety of industries adopt the practice in design. Sure, consumers in the financial industry are extremely serious about their interaction with Fintech apps and platforms, but this doesn’t mean that the app has to be boring and serious. Gamification can be used in Fintech designs, to allow users to become more engaged with the product, focus on it, and efficiently find solutions to their problems. The elements of gamification, however, need to be really thought about, as they should not hinder the user journey or act as an element of distraction.

In order to design the best Fintech app, it is extremely important to choose an appropriate background color for the application, as it plays a vital role in the efficiency of the product. It is important for the designer to keep the target audience in mind. 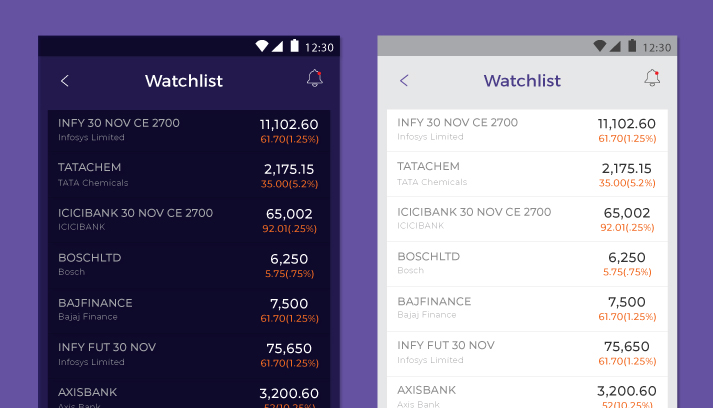 Darker backgrounds may look visually appealing, but they have drawbacks — especially when it comes to mobile devices with poor displays, where visibility can be affected in daylight. However, dark backgrounds tend to provide an opportunity for presenting graphic content, such as the performance graph, which is a vital element in any trading application. Also, they provide support for good visual hierarchy.

Fintech apps comprise of a lot of numbers. While selecting a font in such cases, there are a number of guidelines one must consider. Check the symbols of the font, for eg ‘$’, as well as design for each individual figure. Since finance revolves around a constant change of numbers and figures, we need to also keep in mind that the chosen font is flexible in compact spaces, without affecting the legibility. Few of the recommended fonts would be Roboto Condensed, Lato and Titillium Web. 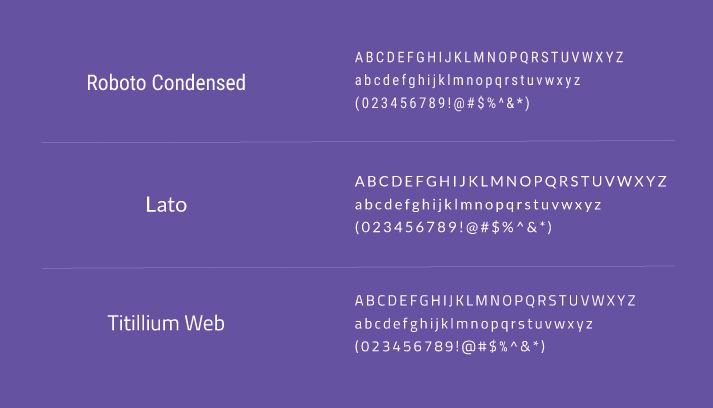 As UI designers, it’s really natural for us to be drawn to creating something new, exciting, and fresh for performance charts. However, when designing a mobile fintech app, one should focus on the UI design principles of familiarity and clarity. One should stick to a simple chart style that is easy to read and the ones your users are accustomed with. Another point to consider is the tech limitations- many Fintech giants work with set frameworks and APIs, leaving very minimum space for design advancements.

A color palette can make or break the design. That is why it is so important to put in a lot of time and thought into it, before deciding on it. The users of Fintech mobile apps are extremely used to the colors red and green, for sell, buy, bearish and bullish. In keeping with these colors, it is important, to sum up, a color palette that is designed for data visualisation. It is also vital to keep in mind that the colors red and green stand out from the rest of your palette. Using as few colors as possible also helps enhance data visualisation. 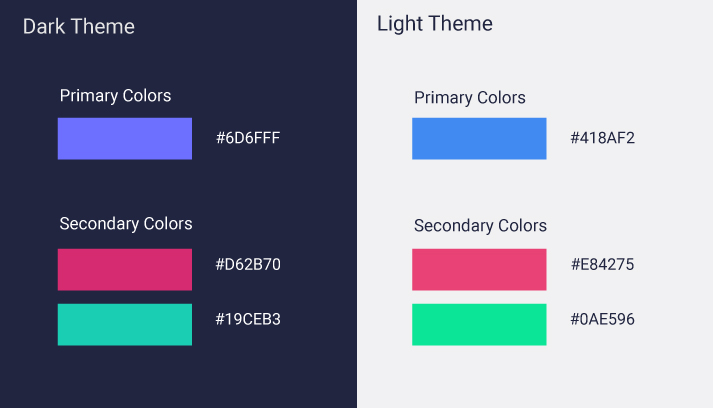 Though we have summed up the basics of designing an app for the Fintech industry, if you are a designer, please be prepared for the some of the technological challenges that are mentioned below.

As stated in one of the aforementioned points, when designing a Fintech mobile app, designers are most often required to work around the company’s existing framework, which can prove to be quite difficult. This is because the existing framework may have been built with outdated technology that may not be entirely supportive of modern designs. This limits designers in many areas, who’ll have to eventually scrap design ideas and work according to the tech team’s requirements. In such scenarios, as a designer, you must be aware of the technological limitations beforehand, so as to save up on time and be efficient in your work.

Gap Between Designers and Developers

With the era of technology now advancing, numerous kinds of software and applications have been introduced, with the sole purpose of bridging the gap between designers and developers. However, there are problems that arise when traditional developers refuse to adapt to these newer advancements. Moreover, there might be times when they are unaware of the different kinds of software available. This creates a very challenging scenario, as it calls for more coordination, explanation, and the effort to realize the designs.

Today, we see that many new Fintech players are revolutionizing the way people deal with money and are employing state-of-art-technology for the same. But, if we dig deeper, we will find that a large segment of the target population, especially in Tier-I and Tier-II cities of India are not comfortable with the use of technology when it relates to money; in fact according to research we are only serving 3% of Indian population with our Fintech solutions and the rest are untapped. And, to truly be able to serve the users, service providers will need to invest in simplifying the technology and interface, as well as in educating customers.